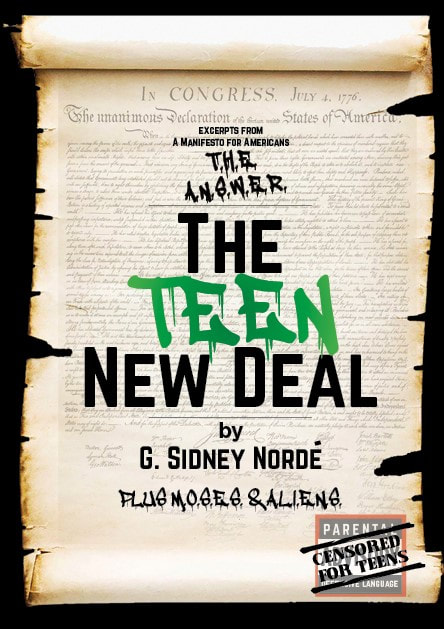 What is the “TEEN New Deal”?

“The TEEN New Deal” is an interactive book for youth that includes a 12-step plan to give America a “big gift” by 2026, America’s 250th-anniversary celebration.

The gift that “The TEEN New Deal” presents, would be achieved through federal legislation and is composed of four ideas:

The main idea of “The TEEN New Deal” is that compensating, incentivizing, and rewarding students for academic and moral labor at school, can also be used as a solution later, when those young people transition to adulthood. Adults can be offered incentives and rewards to achieve more desirable behaviors and lessen societal ills, like racism, violence, and socioeconomic inequity.

The 12-steps of the “TEEN New Deal” originally appeared inside a companion book for adults, titled “A Manifesto For Americans: T.H.E. A.N.S.W.E.R. (To Heal Everyone – A New Society With Educational Rewards).”

President Roosevelt’s “New Deal” included “Social Security” which still exists as a way to provide senior citizens with the funds they need during retirement. However, Roosevelt’s “New Deal” specifically cut out programs that included jobs for teenagers. The Social Security system is now in danger of losing the funds it needs because many Americans are delaying childbirth or are not having children altogether. The “TEEN New Deal” could fix that by creating millions of jobs for teenagers… at school! Once student earnings are taxed, those funds could be used to give Social Security the boost it needs.

Once students graduate and enter the adult workforce, an incentive/rewards-based approach would be continued, ensuring that adults maintain socially equitable behaviors into the future and beyond. Both ‘T.H.E. A.N.S.W.E.R.” and ‘The TEEN New Deal’ include a chapter titled ‘Beyond Reforms’ — a collection of mini-essays — imagining how youth in the future, who have been paid, incentivized, and rewarded to attend school, could reform society.

Do The Write Thing of DC believes the best way to make “student pay” happen is to put words into action. The “TEEN New Deal Virtual Debate & Roundtable” is an afterschool program offered by Do The Write Thing, inside DC public schools.

Students, whose parents enroll them, will be paid to study the 12-Step plan described in “The TEEN New Deal.” They will use the information they learn to participate in an online, recorded debate about the efficacy of the solutions promulgated in the book to address social inequities. The final, edited version of the debate recording will be shown to an audience of students, their parents, and other community stakeholders.

(VIDEO): Click below to see the clip of DTWT’s “TEEN New Deal” Virtual Debate and Roundtable with youth from the 2021 Marion Barry Summer Youth Employment Program